A Scathing History of Umkhonto we Sizwe 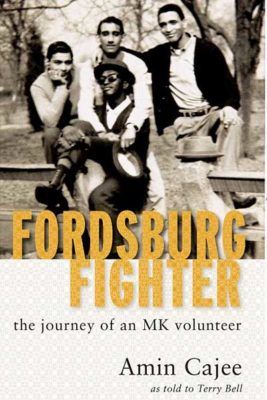 MANY have been wondering why South Africans insist on telling the story of Umkhonto we Sizwe (MK), the military wing of the African National Congress (ANC), in the heroic mode when, in truth, the country would be better served if the story were told in the tragic mode. Far from being a romantic tale in which a heroic people with its army, MK, in the vanguard suffered through trials and tribulations before reaching the promised land that was a democratic South Africa, the history of MK is in fact a tragedy or, as Amin Cajee tells it in his brave and necessary book Fordsburg Fighter, a tragicomedy. A military wing founded to liberate South Africa, MK could barely feed its members—let alone wage a people’s war; heavily infiltrated by apartheid agents, MK could literally not shoot straight even when faced with an apartheid agent, unmasked in its ranks in a Tanzanian camp, standing before a three-man firing squad made up of trained MK members. The agent fell to the ground before the squad fired, played dead and then fled into the Tanzanian bush while the members of the firing squad dug his grave. He resurfaced in South Africa as a member of the Security Police, working against the ANC. This, then, is the vaunted people’s army whose history, as Cajee tells it, is less than heroic.

One of the first South Africans (and first South Africans of Indian descent) to join MK in 1962, about a year after its founding, Cajee found in exile a movement torn apart by alcoholism, corruption, ineptitude, tribalism and violence. In Cajee’s telling, not even Chris Hani, beloved by many on the left today as the greatest president the New South Africa never had, was immune from the poison of tribalism. Such is Cajee’s account of life in ANC camps in Tanzania in the 1960s that it almost does not matter whether Joe Modise, MK’s commander-in-chief, was an apartheid agent or not. Modise was such a bully (insisting that Cajee polish his boots; demanding that Cajee hold Modise’s glass of water while Modise drank from it, for example) that the outrageousness of his actions turned him de facto into an agent provocateur. No apartheid agent could have done more than Modise did to destroy the morale of the men in the ANC camps.

Even the Wankie and Sipolilo campaigns, claimed by the ANC as a heroic chapter in MK’s early history, turn out to be less so. The campaigns, in which MK worked together with Joshua Nkomo’s ZIPRA fighters in a bid to chart a path from Zambia, through Rhodesia, to South Africa were, according to Cajee, suicide missions intended to rid MK and Modise in particular of critics who had been wondering why young men who had joined MK in order to liberate South Africa were wasting away in Tanzania instead of fighting for freedom back in South Africa. Cajee says that, in fact, the many of those who perished in the campaigns—ill-considered, ill-fated and advertised beforehand in the Zambian media to boot—were Zulu-speaking members of MK who had been among Modise’s sharpest critics. Modise sent them to their death. In fact, says Cajee, when Modise accused one of these men, about to cross the Zambezi into Rhodesia, of cowardice, the man responded by asking why Modise was staying in the relative safety of Zambia instead of going with his men to battle. Modise walked away. He had no answer. This is one of the many tragic stories Cajee tells in his book. Some will no doubt denounce Cajee as an MKdefector. He accepts the charge. But, as he points out in his defense, he chose life over certain death. We should be grateful to him that he chose to live. Dead men can tell no stories. Cajee has told his and we would do well to listen to it. Towards the end of Fordsburg Fighter, Cajee asks if MK did in fact wage an armed struggle. He answers his question thus: Yes, MK did wage an armed struggle but, sadly, the bulk of that struggle was within MK itself—MK members fighting against MK members; MK members killing MK members; MK members abusing MK members. That is tragic not heroic.