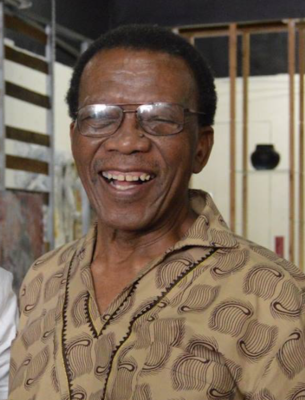 DBZ Ntuli is phenomenally prolific when it comes to the written word. Just feast your eyes on some of the works of this isiZulu literature giant: four novels, the first published in 1961 at the age of 21, 16 volumes of short stories and essays, 10 books of drama. He has authored or co-authored eight anthologies of poetry and translated numerous manuals and books. The crowning moment of his work as a translator came when he was asked to translate Nelson Mandela’s autobiography, Long Walk to Freedom, into isiZulu. That translation, titled Uhambo Olude Oluya Enkululekweni, earned DBZ Ntuli the South African Translators Institute Award for Outstanding Translation. DBZ Ntuli has received over 20 awards for his literary exploits.

If ever you needed to see the purest example of a writer rising head and shoulders above his background and fulfilling his potential, look no further than DBZ Ntuli.

Deuteronomy Bhekinkosi “DBZ” Ntuli was born in 1940 in Gcotsheni, KwaZulu-Natal. He has fond memories of his upbringing. “Gcotsheni was a typical rural area in Zululand. We went to school barefoot, and after school I had to look after cattle. Our community had warmth, love and the spirit of Ubuntu that I will never forget.”

It is in this serene rural setting that the seeds for his love of stories were planted. “My mother was a good storyteller, and most evenings were spent in our common hut, where we listened to the traditional and other stories she told us. The absence of radio promoted lively verbal communication.”

DBZ could draw impressive pictures at a young age. He dreamed of being an artist. That all changed in higher primary school after becoming immersed in a story. “The first, most impressive book I ever read was Isisulu Sabaphangi, an isiZulu translation of RL Stevenson’s Treasure Island, which was prescribed for one of the higher primary school classes,” he says. “I thought the story was true.”

It was after his teacher told him that the story was actually fiction that DBZ decided to become a writer. “After being told that Isisulu Sabaphangi was mere fiction, I developed a burning desire to write something like it.”

Inspired by the poetry of BW Vilakazi and the novels of Sibusiso Nyembezi, DBZ started writing his own stories and poems. While in his teens he wrote a story that made him realise he had the talent to pursue writing as a profession. His natural talent as a storyteller was evident, the accolades immediate. “It all started when I was writing the story of UBheka in high school; of course it was published as a novel a few years later. A year later my first short story, Who Will Judge?, won me my first literary award when I was still a student at University College of Zululand. These early successes were a great incentive for me.”

And things had come the literary full circle because Sibusiso Nyembezi, a writer that DBZ had read in high school and idolised, edited his first novel.

DBZ didn’t have to look far for morale when he started his journey as a writer because his older brother, CSZ Ntuli, also a writer, was right next to him. “My late brother was my greatest supporter. He was the one who suggested that I use the prize money I had received for my short story as a deposit for my first typewriter: he would pay the balance. He always offered me encouraging but honest comments on my writings.”

DBZ and his brother eventually teamed up to produce an anthology of poems and three collections of short stories and essays.

DBZ has written in all forms but he feels that he is at his absolute literary best when writing short stories. “I favour the short story because I can produce a complete story within a few hours. It is flattering to read positive reviews by readers and critics who think I was blessed with a special talent to tackle this genre.”

He has a simple criterion for what makes a story work. “A short story must be interesting throughout and fulfil its purpose, which may be to entertain or educate or both.”

Now 78 years old, DBZ Ntuli continues lending his expertise to various projects. “I am engaged mainly in translation and editing projects. But I am also halfway with [a book of] short stories in response to a special request from a publisher.”

DBZ has a sobering outlook about what made him produce so many books over the years. “When ideas come I can’t rest until I put them on paper. I have learnt that you can’t achieve much unless you sacrifice some of your leisure time and concentrate on what you believe is your calling. When there is a need, I get to my desk and write.”

For a man who has won numerous awards, it comes as a surprise when he lists the proudest moment of his writing career as, “When I opened the pages of my first publication, I just could not believe my eyes.”

His proudest personal moment was when he became a doctor of letters. “The day I graduated with my PhD I was surrounded by my relatives, friends and colleagues. I happened to be the first black member of staff at Unisa to reach this qualification. There was so much excitement.”

DBZ Ntuli believes reading is the best teacher for writers. “Read as much as you can of the best works written in the category of your interest; try to be original, don’t just imitate others; attend writing workshops to broaden your mind; practice makes perfect, so give yourself time to perfect your art; if at first you don’t succeed, try, try, try again.”